After the breeding non-start of two weeks ago, I was feeling pretty down about our pig herd expansion project. We were, after all, supposed to be increasing the size of the pig herd; instead, we had our least successful spring birthing ever (SEVEN. Seven piglets from three sows. It still hurts.). Then, we were excited about the accidental pregnancies in the grower herd -- free piglets! We can make up for lost time! But Myrtle's litter of -0- living piglets left us discouraged -- what if the other 5 accidental pregnancies were the same?

The grower herd, where individuals grow but herd size, unfortunately does not, at sunset

Well, this past week has shown that not to be the case, in the cutest way imaginable. Black and, um, Other Black (we need not only names for them but a way to tell them apart as the only ascertainable difference between them is that one's ears are slightly floppier...) had textbook farrowings -- no stillborns, no interventions needed, no injuries, ideal first-time litter sizes.

Black with her Fattening Eight

Now we can be a bit more excited about the other new pigs we are waiting on.

Other Black with her Seven.

We bought in three new breeders, unofficially called Phantom, Hamspot and Little Missy, from Farmer Tim. They are a solid unit, but have integrated well with our old breeder herd. They know their place, don't pick fights, and defer to the old breeders in matters of territory and feed. 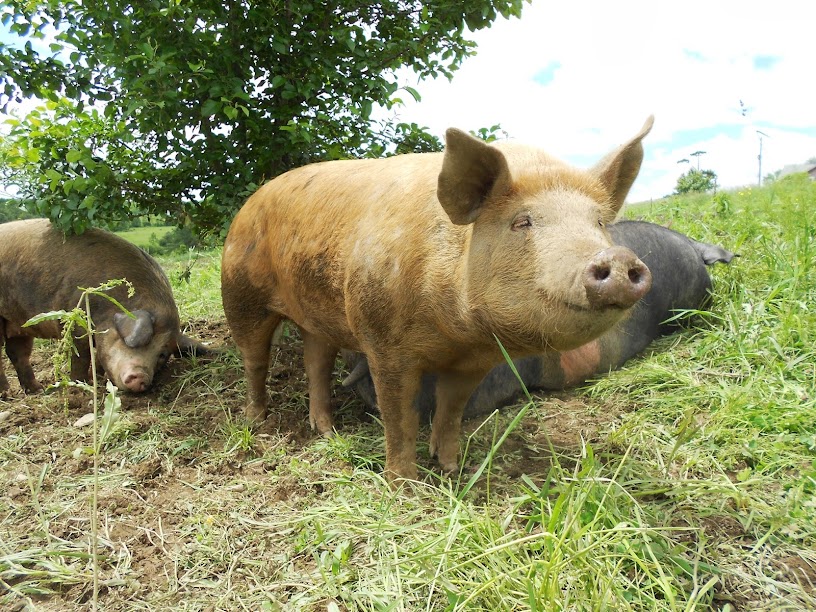 Little Missy grins, as old breeders Striper and Stamp galumph in the background.

The other three accidental pregnancies from the grower herd -- Patches, Goldie, and Blaze -- are also a unit, but they don't seem to get on with the old breeders very well. Patches was the queen bee of the growers, and she wasn't willing to stand down without a fight. She got pretty bruised up in the first few days, so her team tends to set up camp away from the other group. These days that means hanging out at the far end of the breeder pasture. They found a nice patch of clover on cool, moist ground so they have a good setup even though the old herd took the primo area around a little brook and crabapple trees. 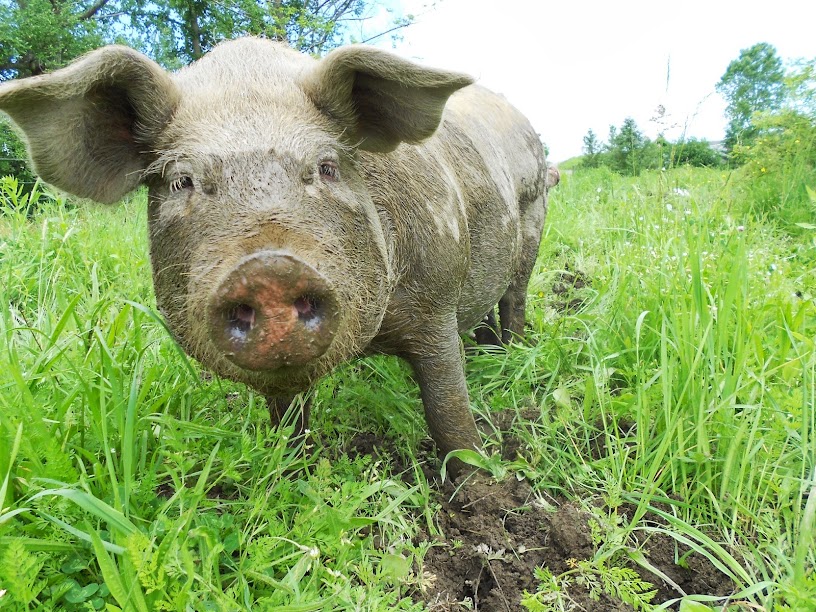 Goldie is the next accidental pregnancy to pop; she looks to be about 2 weeks away.

Spotbelly and Little Red are now the two oldest pigs by a whole year, and their children Victoria, Striper, Chilly Bear, and Stamp round out the old herd. They have the routine figured out: find a tree, take some bites off of it, clear the area around it, sleep, eat some greens, wallow, spar with the younger upstarts, root about, reign in peace, sleep. It's a good routine.