A brief missive tonight, on the eve of what is hopefully the last night of this, the Great War for Chicken. 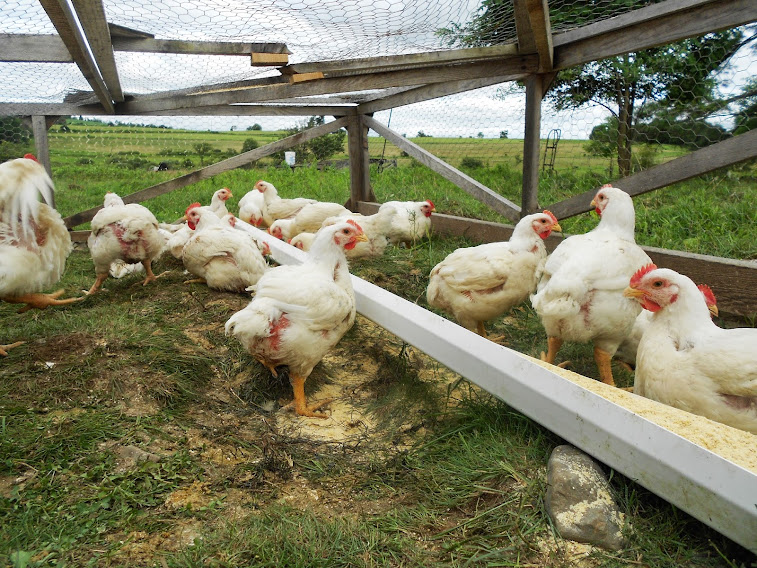 Weeks later, after traps, repositioning fencing, and the like were unsuccessfully tried, on a dog walk, Dart the Farm Puppy/Gloriously Nosed Scout discovered a small pile of white feathers -- one mile away from the farm, near the lake. Said feathers are suspiciously familiar to the farmer. After encouragement, the Glorious Nose ran off, bounded about, and the farmer saw not only familiar feathers, but a ripped-open stomach filled with familiar feed. And still Dart raced on. She finally stopped short at a fox burrow, and proceeded to furiously dig. It took great effort to get her away. On the way home she found five other burrows.

Chickens in tracors, platform in the tree, meandering and useless Beaulah the Future Milk Cow.

The enemy now identified as foxes, majorly plural, we get down to business. More traps are engaged, some of which are sprung, none of which trap anything (except for one time an errant chicken, who was quite perturbed at being stuck in a cage with a dead chicken).

We decided that such terrorism on the part of foxes not only justified but required small ethical lapses for the greater good. Fernando, ancient, fat, one-winged meat chicken who lives in the barn, was called to sacrifice himself, if need be, for chickenkind. He spent the night two nights ago tethered to a picnic table in the front yard, while farmers with a .22 sat in the dining room, watching through the window.

Fernando Jesus. Also Little Red winking in the background. She's been waiting to eat him for about three weeks now...as soon as he struts too close....

Despite Fernando's generally kerfuffled, "there's-a-fox-coming-for-me" manner that kept adrenaline flowing for the would-be shooters, that night the fox waltzed past Fernando to take 2 chickens and leave 5 dead in the pasture.

Fernando was returned to the barn and given much corn.

A convenient fox entrance has been created in a convenient to shoot at location.

A platform was constructed and set up in a giant pine tree overlooking the chicken tractors. Watches were divvied up. A small gap was made in the chicken fortifications to tempt the fox. Helpfully, a 60 pound pig coated himself two inches thick, orbitally, in mud and then required medical attention, meaning that all sharpshooters were coated in a mask of pig-mud smell after bear hugging him into the pickup truck, and then into a recovery stall in the barn.

Thank you, muddiest pig in the entire universe (this is after we hosed him off in a wheelbarrow).

And so we will sit, one by one and unshowered, stinking of pig poop (for this is the primary component of pig-mud), from now until past dawn, hoping to catch the fox(es) at it. We have all the power of human ingenuity (firepower, meditation poses, thermoses full of coffee and kahlua, amatuer astronomy practice and the discovery of new constellations, composition of couplets in various amusing meters memorized and silently recited to our chicken protectees and fox adversaries, etc.), at our fingertips, but the fox is hunting for its life, and it will be a close match.

View from the top.