from womb to table.

I thought it might be interesting for y'all to see how we make pigs, from Day One.

Well, to be extremely specific while not trying to be political at all, the beginning of a pork on the table is Day Negative One Hundred and Twelve, the day of breeding. 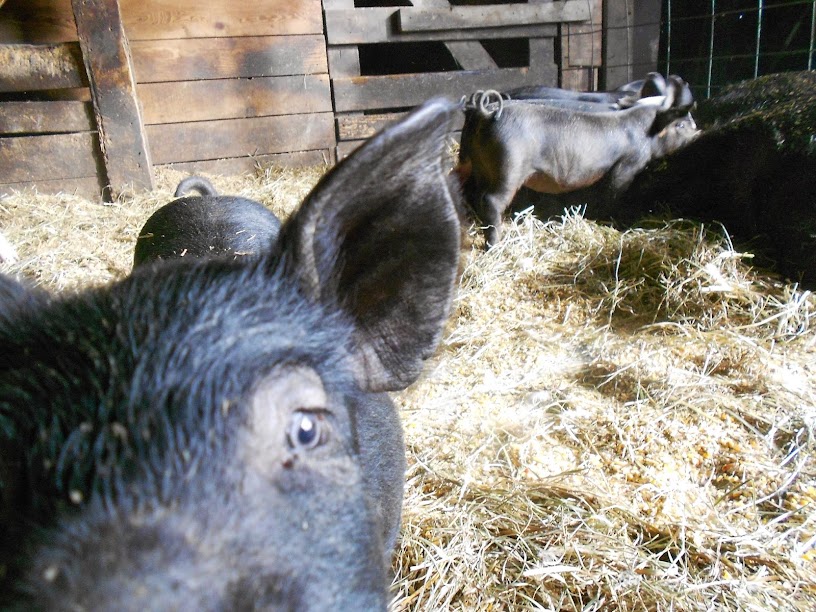 These littles do not just show up from some random stork, but from meticulously maintained spreadsheets

The breeding herd, made up of 16 females and 1 extremely lucky male specimen named Harvey, has it good. We always make sure they have access to lush pastures, shade, and water, the latter in both drinking and wallowing form. We don't rotate them aggressively, instead letting them roam two acres until it looks like they are bored, and then opening up another two acres of fresh browse. We seed their pastures with extra goodies: peas, oats, and brassica mixes. 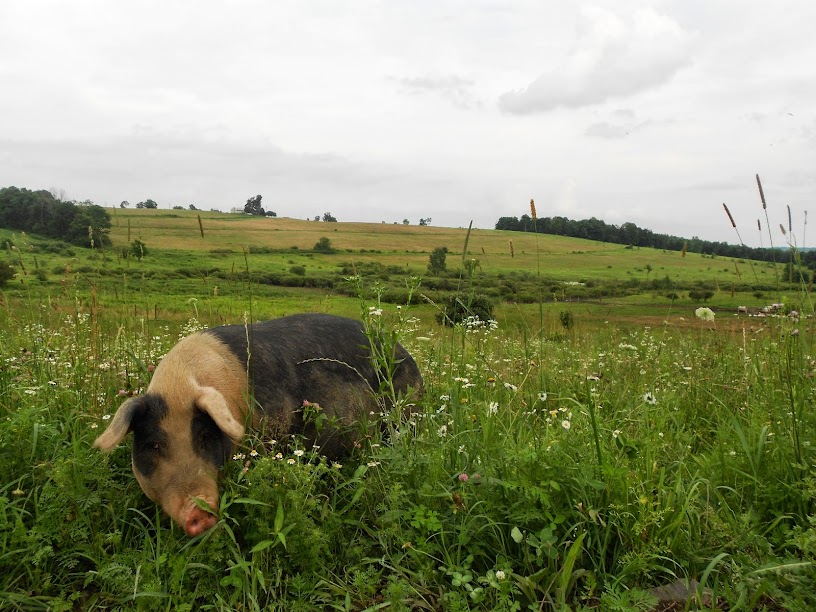 Patches the Breeder in a fresh patch of daisies and grasses.

In return, they make piglets. Lots and lots of piglets, if the farmer is doing it right.

This spring, through a series of unrelated catastrophes all stemming from the chronic farmer evil of Not Enough Time, we did not do it right. Our spring breeding resulted in a whopping SEVEN piglets from three sows. We had to buy some in to maintain the herd. It was depressing.

I am pleased to report that as of this summer, we are, in fact, doing it right. We currently have forty-one piglets nested in the barn with their mamas. 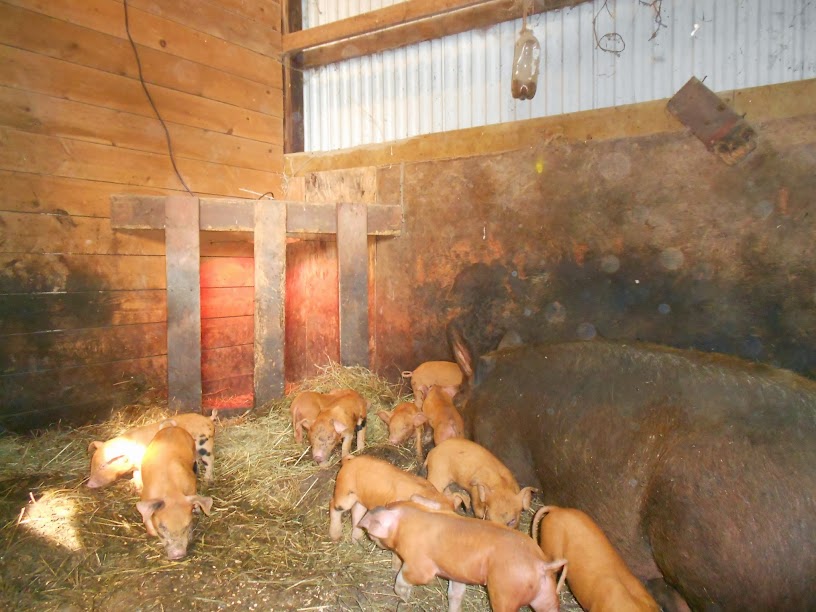 Little Red and her little reds in the farrowing stall. They all match. I love it when that happens. You can see the creep in the corner.

Here is how we manage the piglets, ideally: When a lady looks close to giving birth (there are many signs for this; mostly we monitor their teats for milk inflow), we move her from the breeder pasture into a private 8x10 stall in the barn. The stall is filled with fresh hay, and outfitted with a "creep" in one corner: a little section where the sow can't lay, with a heat lamp overhead. The heat and light attract the piglets and keep them from being crushed by their mom, who is basically two hundred times their size. It doesn't save every piglet -- particularly those who are slow on the uptake of being in the world -- but it does do a lot, combined with breeding for good mothering, to keep mishaps at a minimum.

The sow, newly ensconced in her private chambers, is monitored for imminent signs. Once she chews up the hay, piles it into a giant pile in one corner, and fullfils other necessary physical signs involving female anatomy, we turn on the heat lamp and begin the wait. 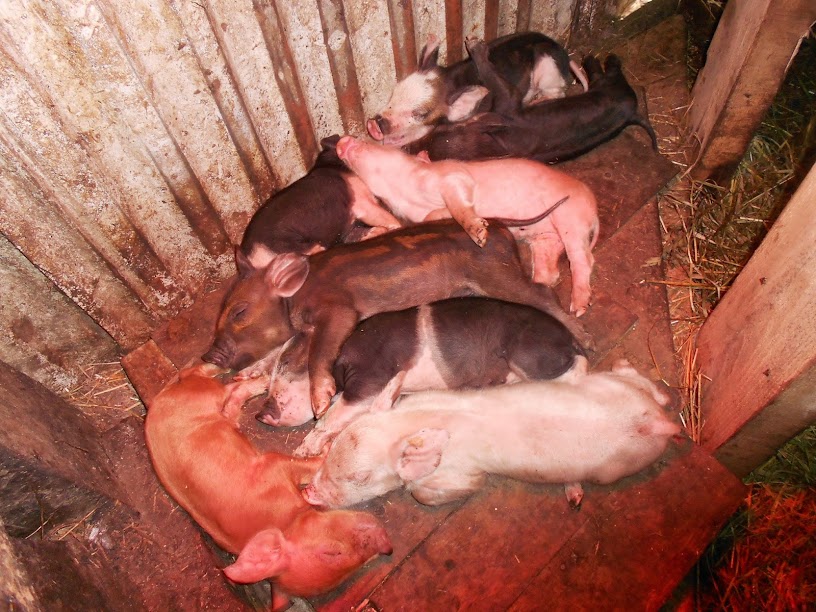 Fresh piglets conked out under the heatlamp. They were from a first-time mom, which we call a "gilt", so they are super small!

Oftentimes, pigs give birth in the the early morning hours -- say 2 AM. But other pigs schedule themselves at more convenient times, and then it is easier to monitor them. Most of our pigs don't need assistance, but every once in awhile a farmer needs to be around. A lot of universities have done studies that say that the presence of a farmer results in one more surviving piglet per litter. It is one of the few university studies that I actually believe applies to us. But still, sometimes it is an uphill battle; pigs have large litters because they expect some (or many) to die. We do our best, and our best is always getting better. We pay attention, have meds on hand, and try to be ready for anything that nature throws our way.

After the first three days, a piglet is pretty likely to survive. They sleep, nurse, and start to play with each other. They go to the bathroom in the bathroom corner, snooze under the heat lamp, nose about in the hay. They generally grow increasingly curious about their surroundings. At nine to fourteen days, we combine whatever groups of new piglets and mamas we have in a bigger area (otherwise the sows get depressed or angry), castrate the males and give the family a general once over. At six to eight weeks, depending on how the piglets are thriving, we wean them. The mamas get vaccinations if they need it, isolated if they need to gain some weight (nursing ten+ piglets can really slim a lady down), and then put back into the breeding herd. 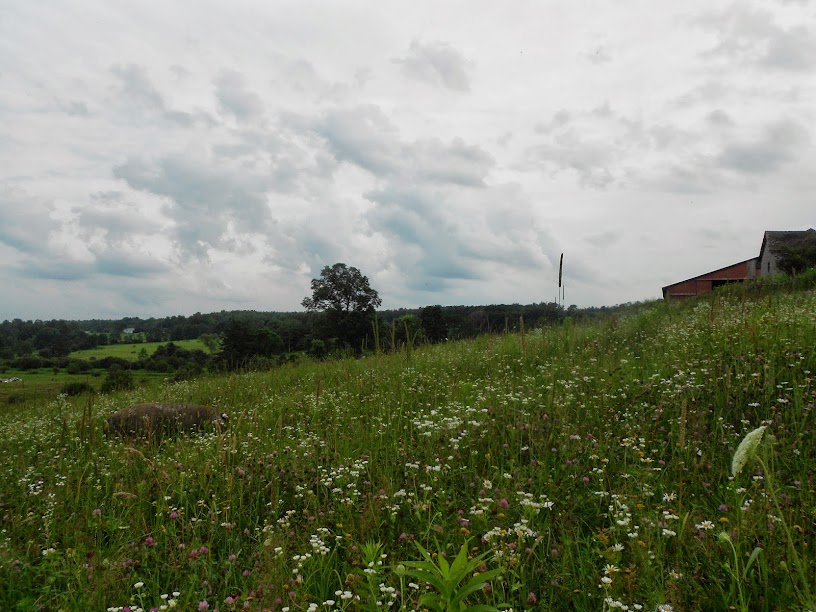 Victoria, back in the breeder pasture and hidden among the daisies after weaning.

The piglets get a round of vaccinations (the pig equivalent of the MMR shots) and moved down into the pasture in a hard fenced pen with an electric wire running around the inside: that's how we train them to electric fencing. They are near enough to the rest of the grower herd to smell them and grunt to them, so when we combine them after a week it isn't a completely blind date. Then they run free in the swamp/forest/pasture, eating all they can stomach of grass, roots, grubs, and feed, fighting and wallowing and snuggling and sunning, until they are seven or eight months old. 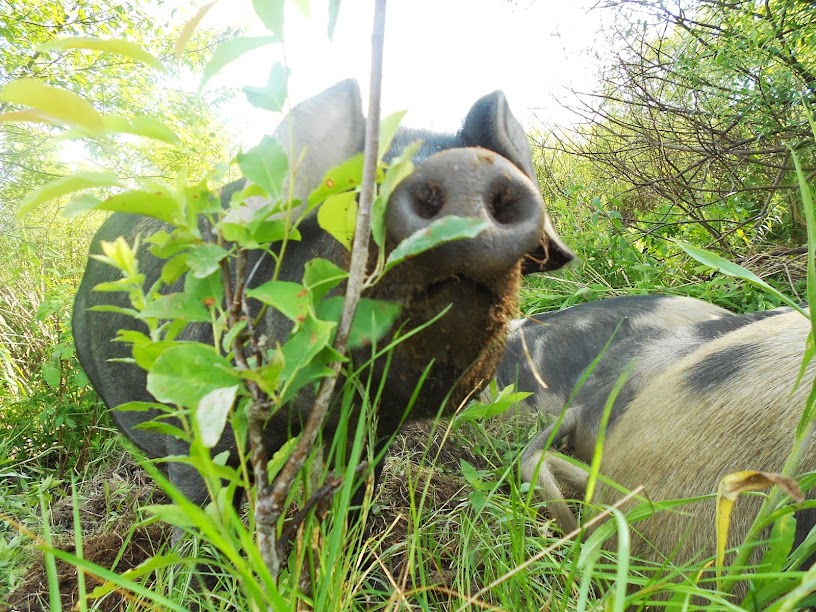 Growers in the Paradise.

Every Sunday, us farmers drive the truck and the tractor down into the pasture. We plan it so that they run out of food on Saturday, so the whole herd is lazing about by the feeders, waiting for us. We scope out the largest two or three pigs, and sort them into a little crate that we can attach to the fenced area.

Then we put the crate in the pickup and drive them up the hill and into the barn. They hate that part, so they get extra feed, hay, and water overnight. The next morning they are pretty blissed out and comfortable, and I drive them to the USDA slaughterhouse 1 hour and 15 minutes away. I unload them into the hay-filled pens there, chat with Kathlynn, buy a giant bone for Dart the dog, who accompanies me, square up the bill, and drive away. 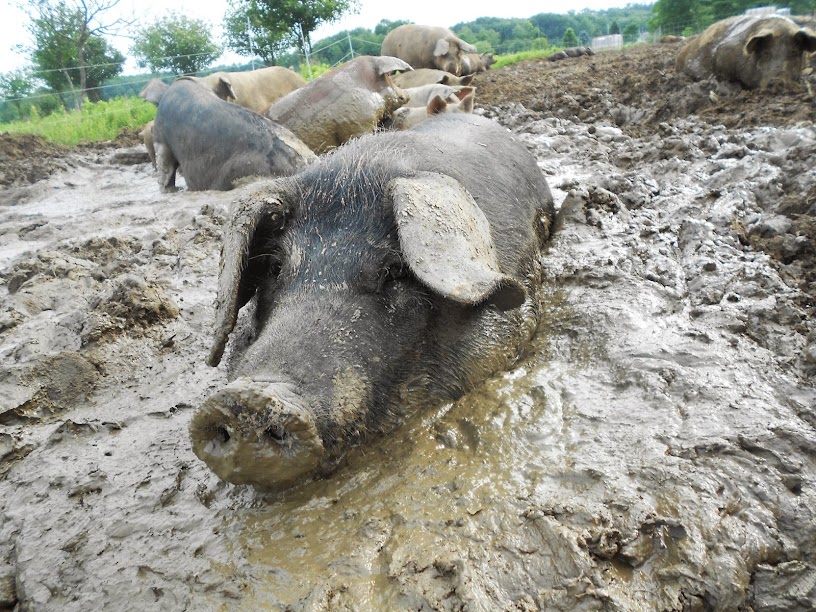 Happy grower pig in the best wallow I have ever had the opportunity to observe.

To be honest, I don't really like leaving them at the slaughterhouse. After being so in control of their lives until now, it seems strange and somehow cowardly to back out at the end. But, it is a necessary thing, for both legal and time management reasons, and I do trust the family who runs our slaughterhouse to do the job well, with respect, and with due consideration of the comfort of our animals. But I do always feel a bit grouchy for a few hours after dropping them off, even though they seem pleased to investigate the new barn and potential new neighbors.

Tim, our farmer partner at Autumn's Harvest, picks up our animals from the slaugtherhouse, along with his, and takes them back to his shop. There, Smitty the butcher cuts them up to our specifications and loads them into our refrigerated truck. Farmer Nick picks up the truck, brings it back to the farm, we pack the CSA bags,  and Farmer Nick himself leaves for the city on Wednesday afternoon, ready to start deliveries at first light on Thursday while I hold down the fort upstate. He spends eight hours unloading meat, varying from neat little CSA bags to storefronts, to entire half pigs and 200 pound beef primals to restaurants. 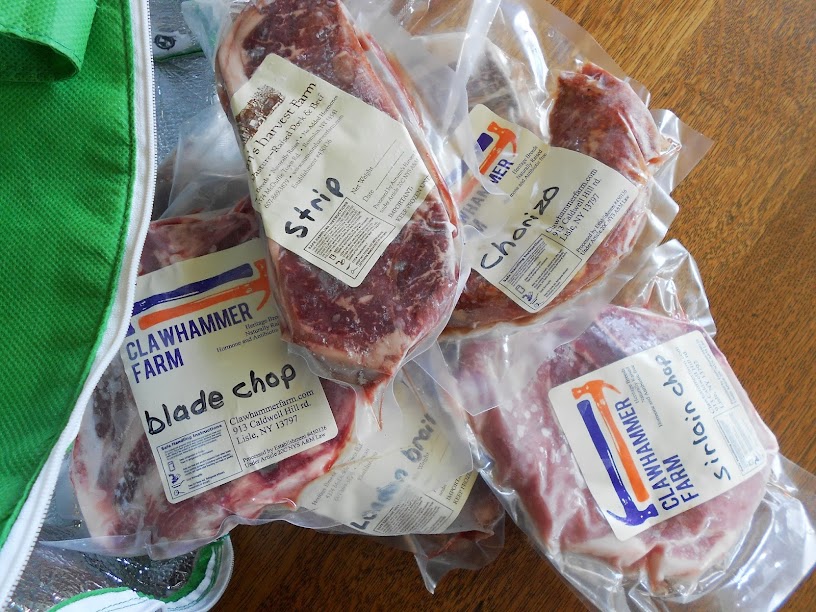 The physical end result of our labors.

And that's the womb to table of Clawhammer pork. If it seems like a long process, that's because it is, made ever more complicated by laws, and the accidental pig getting out, and power failures, and tractor maintenance, and sore shoulders, and floods, and boots that leak, and designing new feeders, and disagreements, and so on. It would seem endless, but for the pork that keeps populating our delivery truck. Because of that, we know that it's both very finite -- lives beginning and ending, and very infinite -- the cycle of lives beginning and ending. Stuck in the thick of it, as we are, it seems at the same time to be an unusual and grand thing to be doing, and to be the most basic and simple of human endeavors. We do ponder on that, when we are not busy blissfully relishing in our busy day, sore muscles, a setting summer sun, and the tantalizing smell and crackle of pork on the grill. 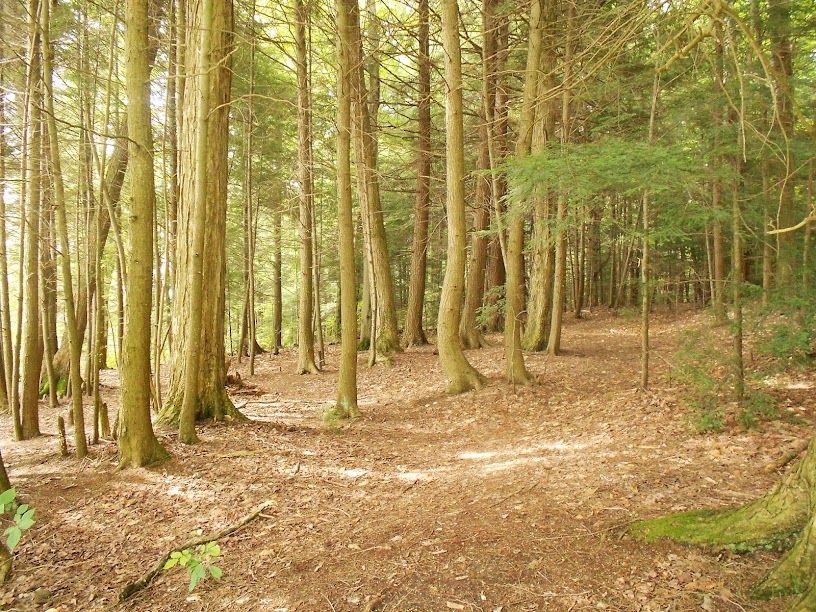 Life going on and on under the summer sun.