On Unpredictability and Rope Swings

Farming is a particularly strange endeavor, for literally hundreds of reasons. To give just one example: on any given morning in the last month, I was equally likely to be eating a breakfast of fresh, free range eggs and antibiotic-free, pastured, heritage breed, hand mixed, small batch pork sausage on top of a bed of lightly wilted, organic, open pollinated, heirloom russian kale while being mildly annoyed by Maureen Dowd's latest op-ed, and laying in a mud puddle with my arm up a sow, fishing for a stuck piglet. 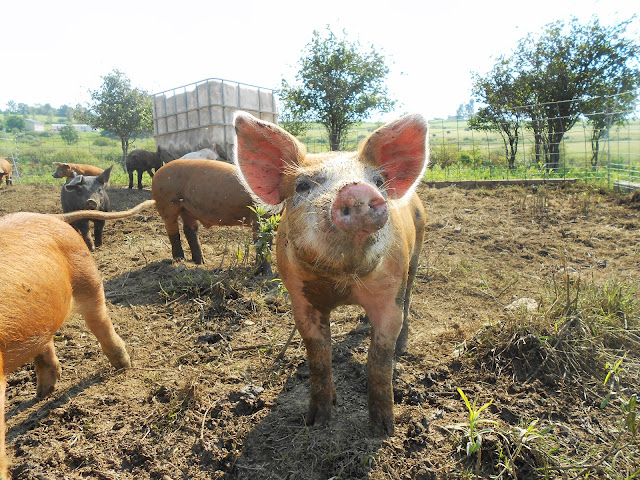 At least one of these weaner pigs was likely an "assist." Now they are just muddy, happy little guys.

In other words, farming is chronically unpredictable.

Despite spreadsheets and charts of projected piglet groupings, sometimes apparently none of the sows get pregnant until the same time two month period, which results in the possibility of ALL FIFTEEN of them giving birth in October and November of this year. I wish I was joking; we need to build more stalls.

Similarly, despite sticking to a rigid routine of training every batch of weaner pigs to the electric fence, sometimes one red grower decides that he would rather hang out with the sheep, and abandons the glorious Pig Paradise to spend time napping with the ewes near the weaner pig pen. Oh but don't worry -- when he gets hungry he just sprints back through the electric fence into the pig area to nosh. And then, full and sassy, blitzes out again when he deigns to have some ovine company. 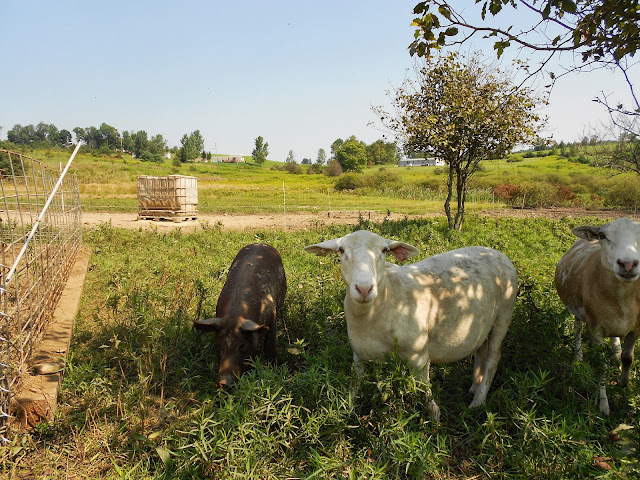 Oh, don't mind me. I'm just a red snouty sheep. It's a really rare, hip breed. You probably haven't heard of it. Because of how hip it is.

And, despite our best efforts to streamline chores and farm maintenance so we can spend at least one day a week (just one day! just one! out of an amazing seven opportunities!!) with the whole team working on the dozen or so major house/barn renovation projects, sometimes on a Work Day Tuesday you notice a 50 pound pig in the 10 acre grower pasture/swamp with a prolapse (you probably shouldn't google image search that without adequate warning. So just know that it's something that needs dealt with ASAP), and everyone is required to march down the hill to catch and wrestle said pig out of the swamp, into the pickup, up to the barn, find the rings/zipties/pliers (I told you not to search it....) for the task at hand, and then get the lady all cozy in a private bunk at the expense of two hours of renovating. 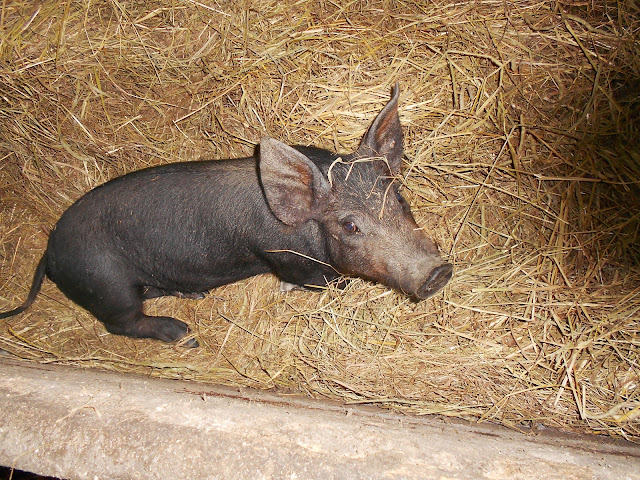 Confused but on the mend in the barn.

And then you end up working on the house until 8:00, because the farm kept interfering and the to-do list was not getting shorter in a sufficiently satisfying fashion. 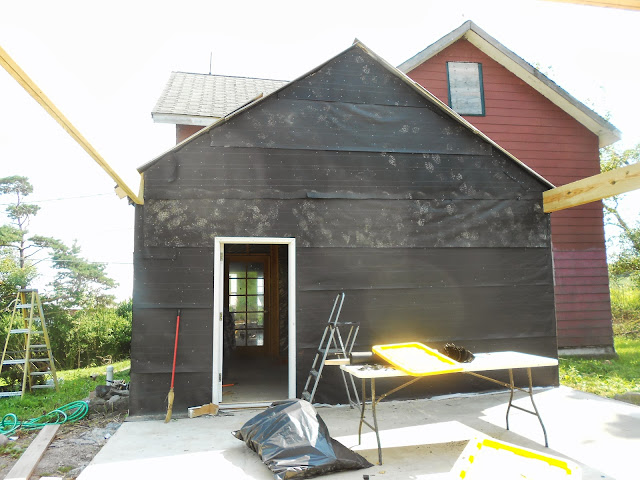 Oh, hey, check in out! In between all that farming, we poured a slab, and demolished a room, and built a new room, and put up supports for a new roof!

And then you do that for several nights in a row. 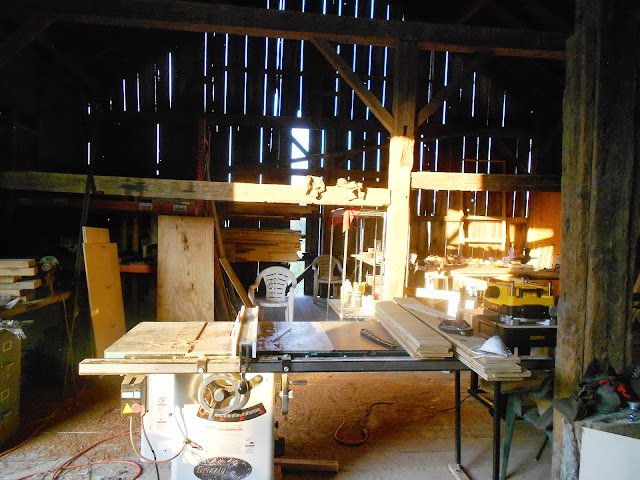 Check it out! We redid the floor in the hayloft, and replaced all the rotted trusses, and now there's a whole entire wood shop up there!

This inevitably leads to "the wall," wherein the desire to blow off steam moves from being a mere niggling at the back of your head to a desire that cannot be ignored.

At those times, sometimes the best thing to do is pack a bag of beer and find a rope swing. 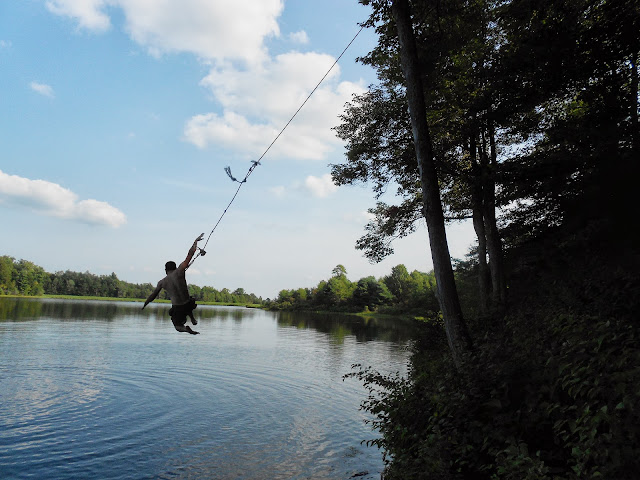 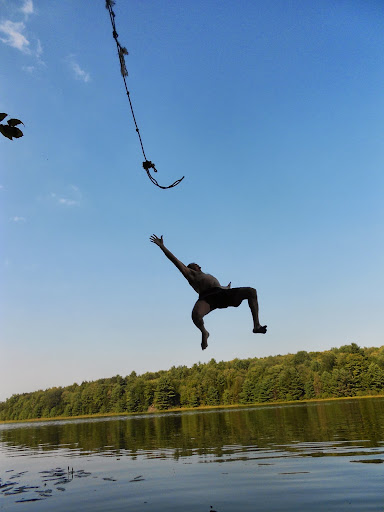 And thus, among warmish and fizzy cans of beer, astoundingly red apples foraged from a wild apple tree, and the slight terror of a precipitous drop into cold water of unknown depths, the rote building and demo tasks, with the attendant tiring farm interruptions, seem like less of a pointless, exhausting bother and more a necessary part of the way life itself actually is: a particularly strange endeavor -- but a moving forward, all the same. 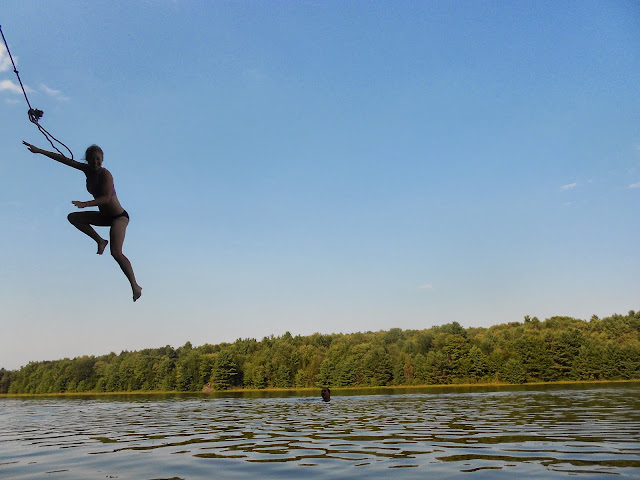 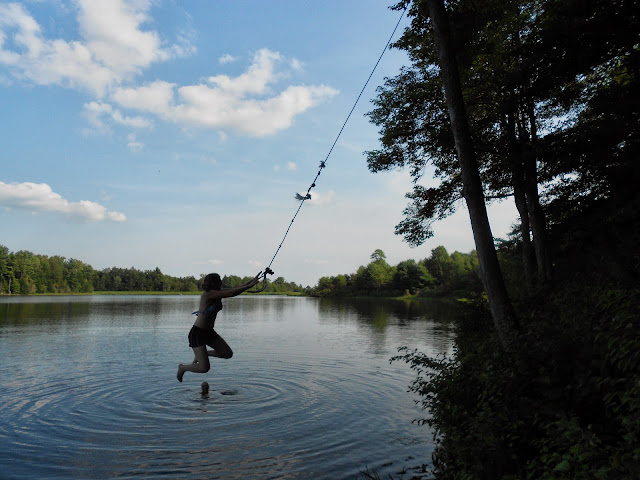