Our first fall lamb was born this past weekend, which means that we had an incredible storm that same night. For nearly seven hours overnight, a giant thunderhead was trapped in the air currents above our valley. It seemed to be very angry about it. The wind roared. The rain hammered. Hitherto unknown leaks showed up: the bathroom ceiling, the bedroom window. Our power went out, and then back on. Through it all I lay faux-calmly in bed, attempting to count seconds between lightning and thunder. I never reached the "wa" of "one" before the astringent thunder CRACK interrupted me. It sounded like the sky was being ripped open. That's what I imagined was happening. It was an easy imagining. 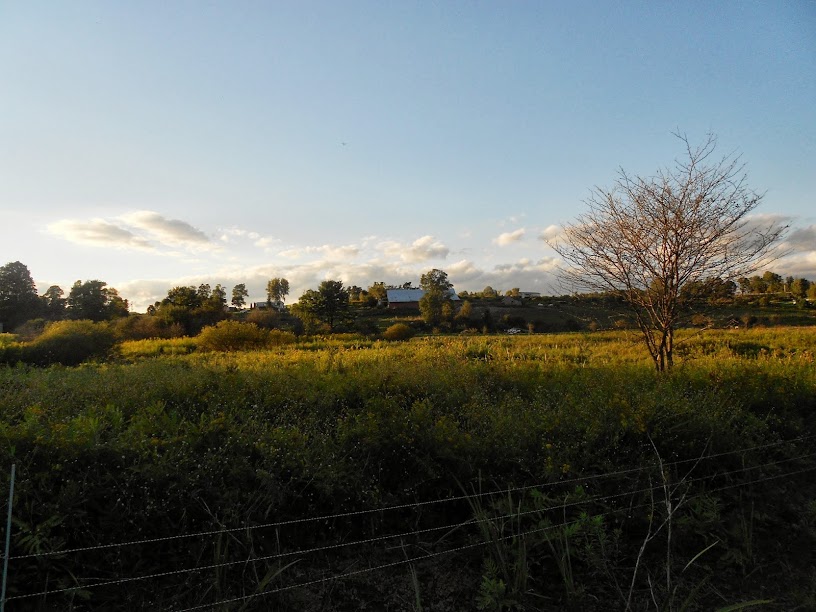 Let us not forget about the tender new soul in the midst of this premordial display. I fretted on and off about the 12-hour-old lamb, somewhere in the Great Wild Pasture with, let's face it, not the most intelligent of guardians to keep him safe. What is a 7 pound foundling against the incoherent wrath of unleashed electricity? 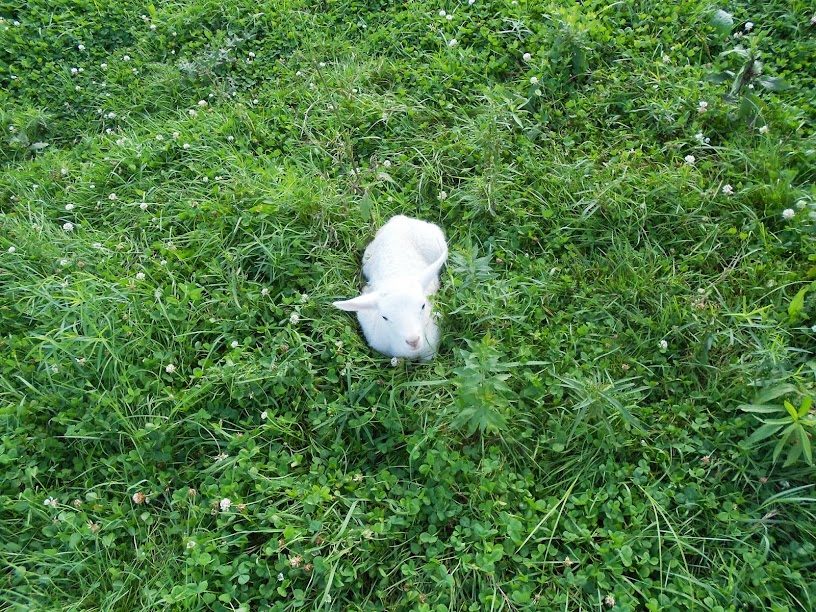 The tiny, trying to blend in to the clover patch. "I am just one giant white clover flower. Don't mind me at all," he murmurs.  You happily believe him, because he knows more than you do.

In the midst of the thunder's oppressive monologue, it was sometimes hard to hear the incessant downpour. But at first light, after the wrath finally moved on and the sun rose, one look at the valley -- swollen creeks, large puddles meeting up with each other to make ponds, actual rapids under the fox hunting tree -- told us how much it had rained: much. And of course my occasional worry about the lamb escalated to visions of the tiny being, complacently drifting downstream toward, most likely, certain and dramatic death via a massive waterfall into the center of the earth.

Somewhat more pragmatically, I was focused on the flood-related tasks at hand. There are exactly three places where the streams cross under our electric fencing, and every time the streams flood the low wires need raised. Otherwise, they end up underwater and the fence shorts out. So, I headed down before breakfast (but of course, after a hurriedly chugged cup of coffee...I am no superhero) to wade about and raise the wires. 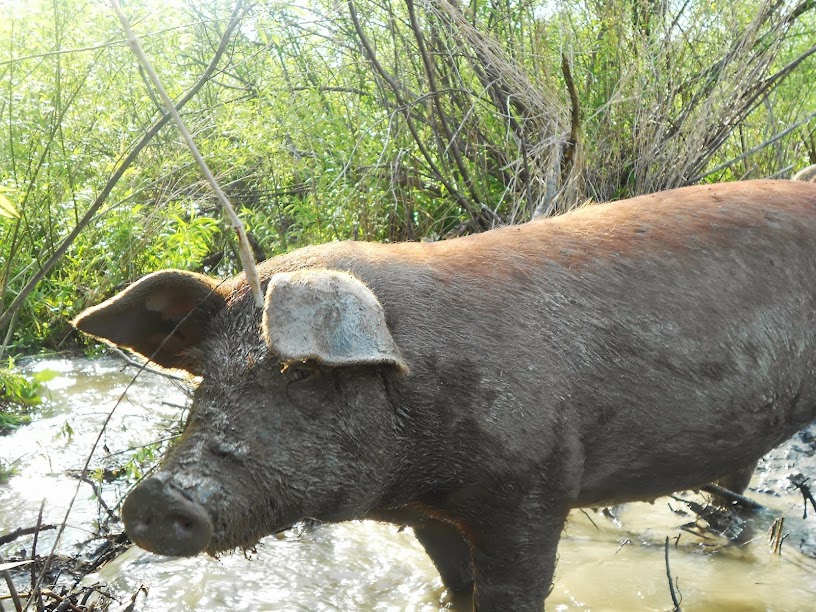 "Wading" very soon became a loose term as I found myself up to my elbows in strong currents and fast-moving debris, sloshing full rubber boots along when I climbed out of the deluge to inspect the back fence line. Not only the low wires were underwater; there was one 50 foot section where the entirety of the fence was under, and several posts seemed to have floated away. I tutted, but resolved that I needed to wait a few hours to solve that problem; the water was just too strong, but luckily for me, the pigs were holed up naively on high ground.

On my way back along the fence line, I disconcertingly found a place where each of the three wires of temporary fence was broken. It was a strange break -- it wasn't pulled to one side or the other like an animal had strained against it and broken through -- it was simply frayed to the point of breaking. I puzzled it over as my breadfast toasted. 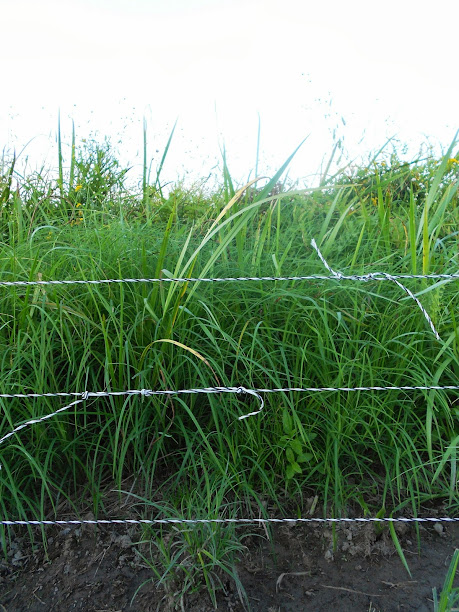 Fence patches after I extricated 50 feet of frayed wires.

That afternoon, on hour five of what I thought would be a 30 minute project, I discovered that the metal clamps we use to connect the temporary fencing to the perimeter fence had fused to the fencing.

On hour six, when my fence tester suddenly started reading -0-, I discovered that the fuse in the fence charger had earlier melted, and just finally exploded out of the side of the charger. 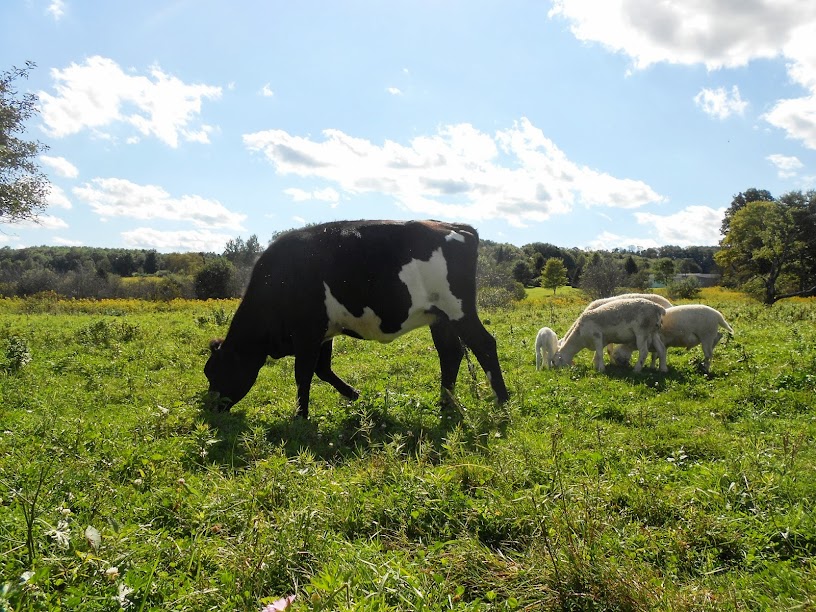 At that point, it seemed likely that the fence had been struck by lightning. It is a fairly common occurrence, apparently (as is livestock being struck by lightening, which I remember from my days reading the marvelous James Herriot as a kid; a rare and telling window into what seemed to many as a random life decision on my part), and the only explanation for the laundry list of oddities that was keeping me busy over a few days. By the time the water was back to its normal levels, we had replaced all the necessary fuses, clamps, charger components, and blasted fence strands.

I must have walked 15 miles back and forth along the fence -- up to the barn to get unexpected tools, back along a different line of fence, time to sally forth and eat something, etc. Every time I passed through the sheep I kept my eyes out for the new lamb. He was always doing exactly what he was supposed to do: He laid quietly in the tall grass while mama grazed. He made loud, pathetic baaas when he didn't know where she was, as happened when he accidentally grabbed another ewe's skirt, so to say, and followed her across the field before realizing that she was not Abernathy, Ewe 1616. Likewise, Ms. Abernathy, Ewe 1616, did exactly what she was supposed to do: She baaa-ed back loudly when he was lost, slowly but demurely escalating her panic until she found him. She nudged him toward her udder when he was standing aimlessly near her like the Jewish/Italian/Any grandmother we all had who love enforcing seconds. She kept slightly apart from the herd and in the heart of their grazing land while she browsed for grass. 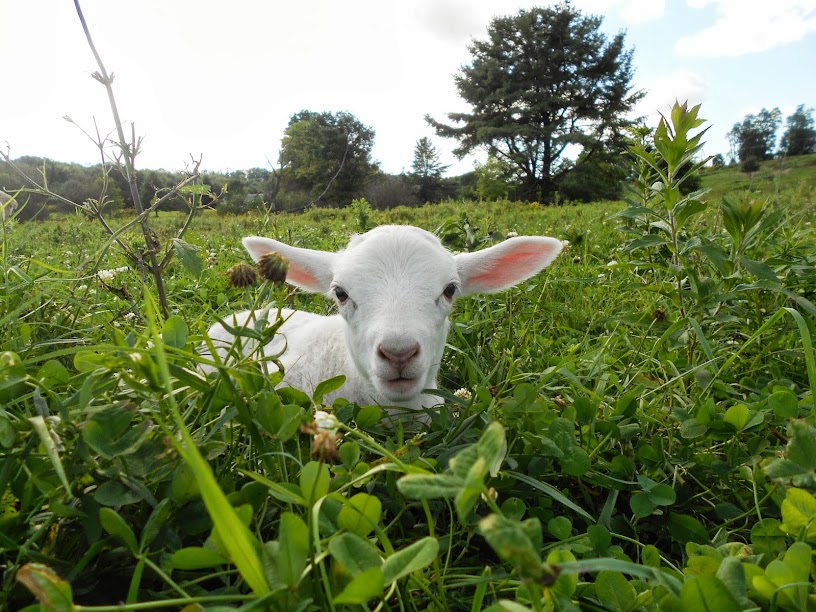 That's generally how the sheep go with us: they are hands off, until they are hands on. Hands on happens in a scheduled fashion twice a year, when we move them in or out of winter housing, trim hooves, and give them their vaccinations or boosters. Hands on also happens at random intervals with individuals as we notice, for example, a ewe with diarrhea, at which point we force feed the offending sheep pepto bismol, straight from the bottle, until it clears up. The pink stains on my pants even got an eyebrow raise at the feed store. 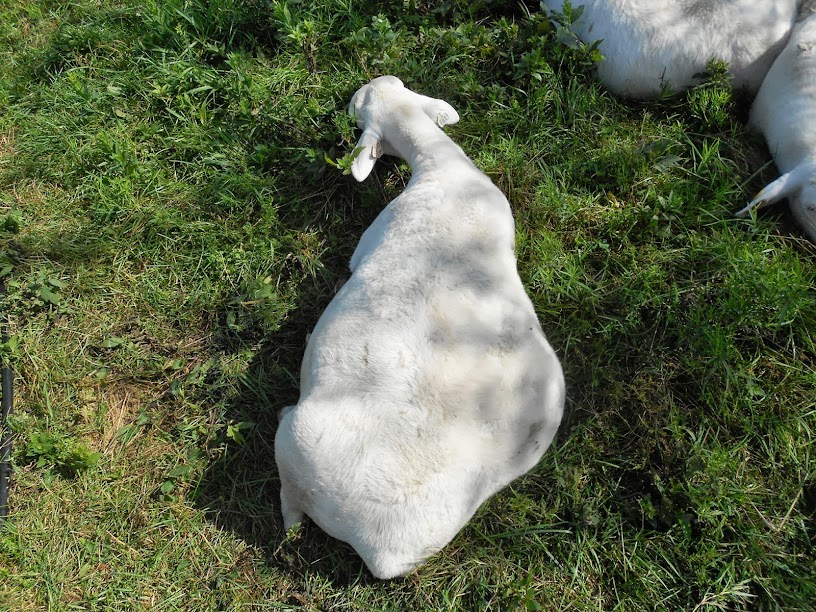 Of course, they also reproduce; that's the whole goal. Right now we've got at least nine ewes smuggling lamb-sized basketballs on their sides. We do a head count every time we go into the pasture to make sure no one has disappeared into the bushes to deal with a hard labor; otherwise, they are on their own. Hopefully they will keep the hands off birthing trend going. Also, hopefully they will decide to discontinue the lightning storm celebration of a successful lambing. I have too much on my plate to deal with nine more storms this month, and not enough dry boots.