On the farm, we work out a lot of percentages to figure out when we're in the realm of acceptable and when something crazy might be happening, and piglet survival rates are at the top of our number crunching. The industry standard for piglets that survive from birth to weaning is 75% -- they expect 25% mortality. At Clawhammer, we usually get 10-15% mortality; a very respectable number that is a result of choosing good mothers, working with hardy breeds, and using a set up that works well for our hogs -- individual farrowing stalls with deep hay bedding, and a heated "creep" corner for the little piglets.

This year, of course, was different. The snow was still too deep and the ground too icy for us to feel comfortable walking the eight very pregnant sows across the hilly barnyard and into the barn, so we did the spring farrowing in the greenhouse...which really would have worked brilliantly, save for the extremely poor timing of what was hopfully our last winter storm coinciding with record rainfall and an extreme 20 degree temperature dip in two hours. All of that combined to create the ideal conditions for piglet hypothermia -- which is exactly what happened to a lot of the little guys. 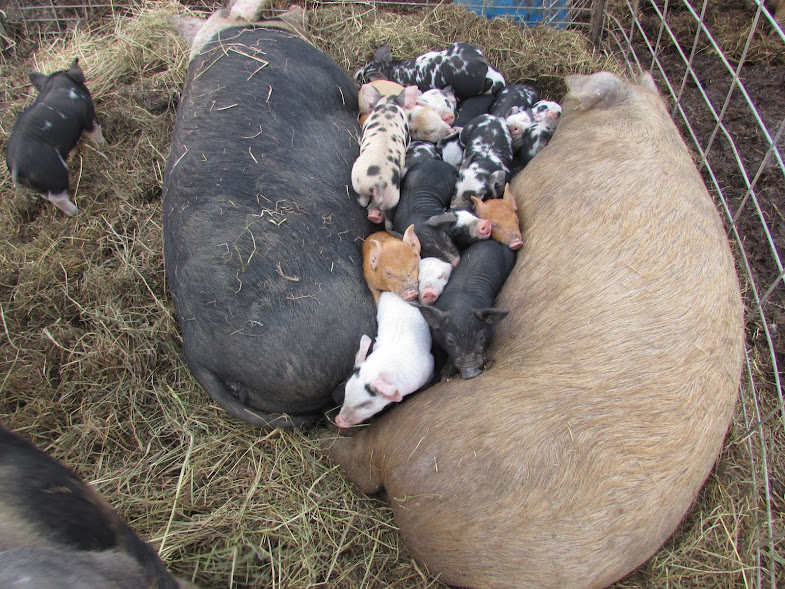 Now that the numbers have stabilized and the youngest litters were over a week old, it was time for me to figure out our mortality numbers. It was pretty cringe-y (yes, that's a technical farming term), but all in all it wasn't nearly as bad as I thought: 35% of piglets born did not survive.

I was counting on a higher mortality number for this round of farrowing anyway -- it was a batch made up entirely of new mothers, and the March births are often more fraught because the weather usually throws curve balls. It was still a rough number for me to swallow. I was kvetching about it with our farmer friends a few miles away (they have a small dairy and we buy hay from them) and found out that they had lost six calves over the course of the winter -- and previously they hadn't lost a single one in years. The weather this year was hard on all of us -- most especially on the farm babies. 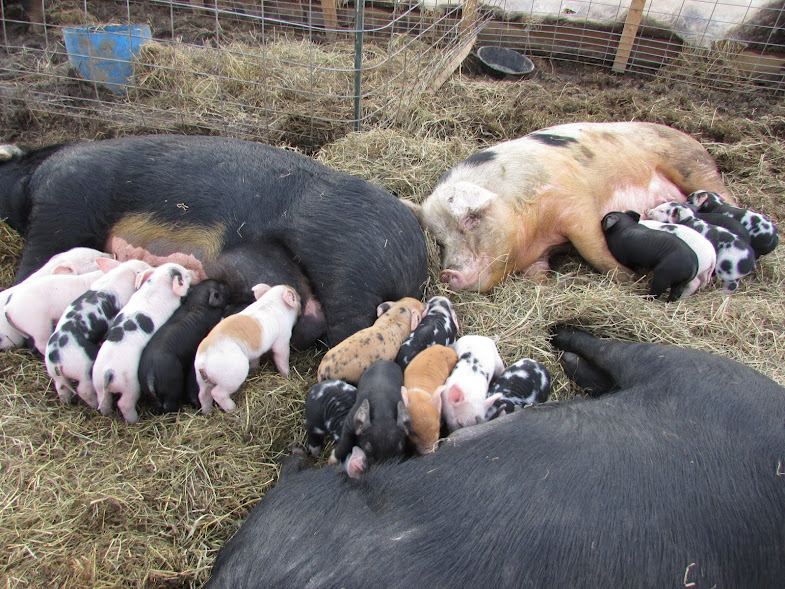 The other classic group-parenting move, Nurse Everyone at Once.

Now that Spring, as of yesterday, has actually officially begun (!!!!!!!!!!!), we're hoping that the weather will get the memo and start doing what it's supposed to do. Until then, there's a backlog of early spring projects piling up, waiting for the ground to thaw....