Take the Polar Vortex; Fill it Up with Lambs

It was with nothing so much as mute horror that I observed a ewe going into labor on January 17th.  I had been watching the ewes blow up like blimps, or flying saucers, or basketball smugglers, for a couple weeks, and had thought to myself that it was insane that they already looked so large, when spring was still so far off. You see, I was under the impression – gleaned from my readings of several New Zealand-based sheep forums, of which I could admittedly only understand 70% of what was said due to a surprisingly vast language gulf – that lambs were born in the spring, on lush grass, under warm sun, with songbirds and flowers scattered about to complete the picture of gentle verdency.... This assumption despite the fact that, had I been paying appropriate attention to the fourth dimension last spring when we bought the sheep herd in March, I would have noticed that by then more than half the lambs had already been born. 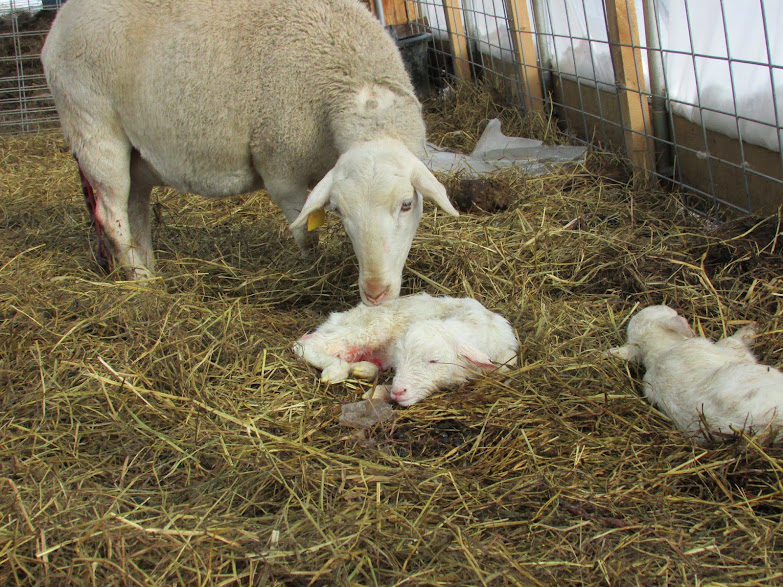 Ewe and twins after a successful birth. Mom starts cleaning the newest lamb off as the firstborn still gets used to being in such a large place.

So, there was a tiny wet lamb, defying my assumptions, bleating and miserable on the floor of the greenhouse, on January 17th, when it was 5 degrees. She was followed by twins who had the ill luck to be born on the 21st, when the overnight low was in the negative teens, and then followed again over the next few weeks by 16 other snowy-white, spindly-legged, almond-eyed beings. 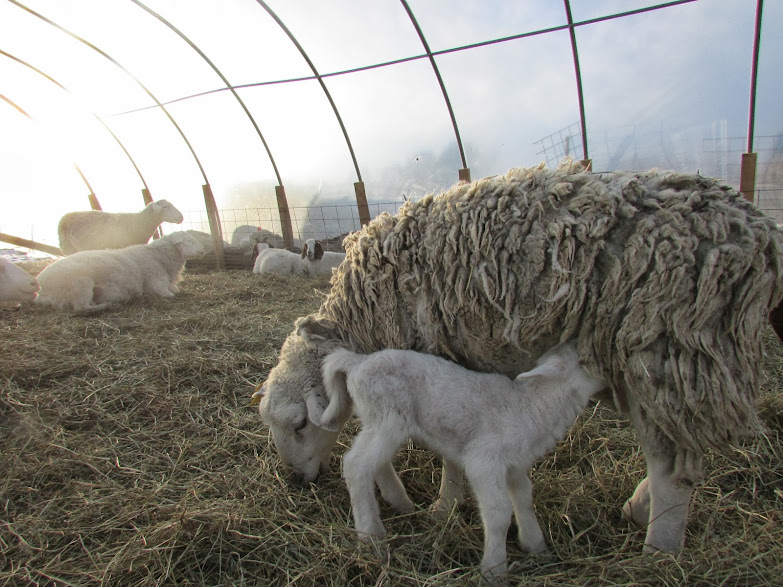 My horror was quite understandable. Our sheep herd is outside, with only a greenhouse to break some of the wind and keep the snow off them. Lambs are born nothing more than skin and bones, plopped wet onto the ground, their survival left to the wiles of the mother sheep – the sheep being an animal not much known for keen smarts. I had visions of needing to bring them all inside next to the wood stove, setting up lamb play pens, being up at all hours nursing them each with a bottle. 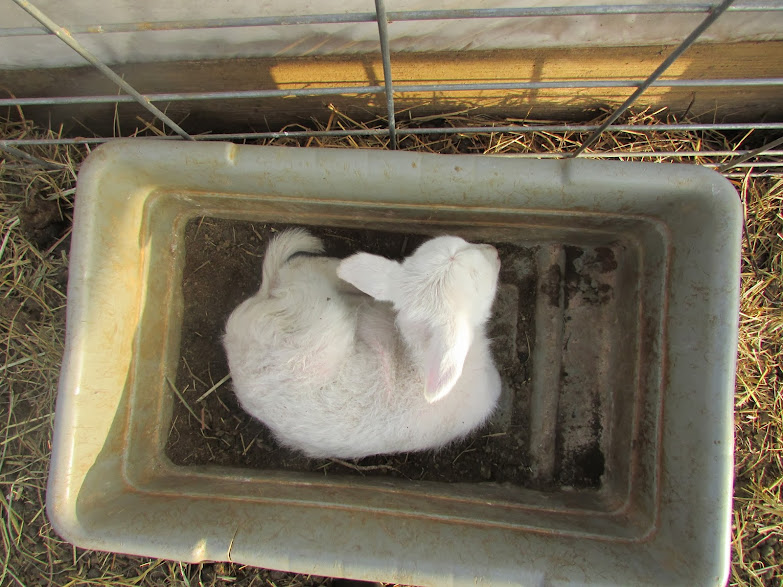 The youngest lambs often like to sleep in the mineral box.

As it turned out, I needn’t have worried at all. What sheep may lack in problem solving skills and critical thinking, they make up for in spades with instinct. As soon as a lamb is born, its mother goes to work licking it clean, pawing at it gently if it isn’t getting up, nickering quietly and smelling the lamb from nose to tail. Within five minutes the lamb is teetering about on its long legs, trying to nurse all over the underbelly of the ewe (the front armpits are a spot they especially gravitate to at first), who gently nudges it back toward her udder. Within an hour or so, the ewe and lamb have learned each others smell and baa – so that they can call to each other individually, and smell out who belongs to them (it is endlessly amazing for me to hear one ewe among the forty “baaa” and have only one lamb – hers – answer the “baa” from across the yard, bound over to her and start nursing). All I had to do when I did chores was stick my finger into the mouths of the napping lambs – if their noses were warm and they sucked my finger, I knew they were doing ok. 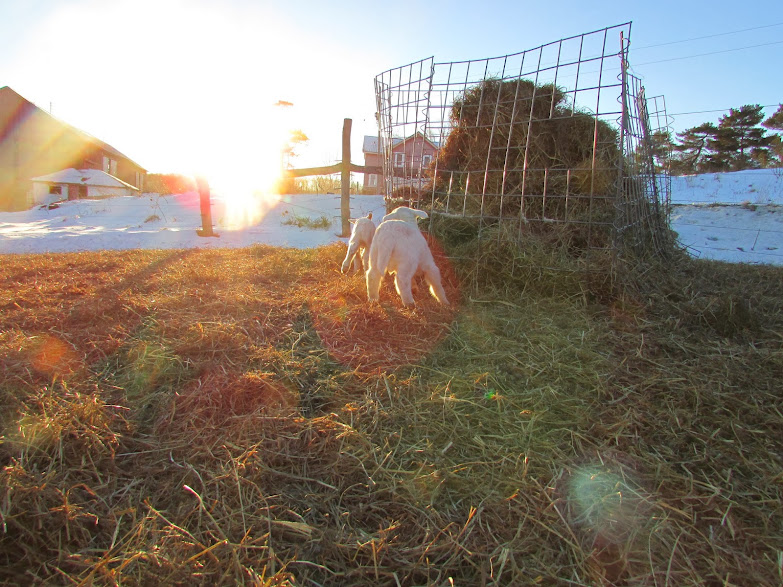 Within a few days of birth, new lambs have already made friends with the other lambs and have begun playing games such as Chase, Run and Hide, and King of the Bale.

We’re in a lamb-lull now; most of the very due ewes have gone, and a good number of the yearlings, and the lambs are off to a strong and vigorous start. Only one needed pulled by me – my first assisted lamb birth! – and that was a breeze. I had been studying pictures of malpresented lambs online, and had been rather skeptical of the drawings, which seemed to imply that the lamb was in a roomy bubble just inches inside the ewe, with plenty of room to maneuver legs about…but in fact that is just what it was like. The little guy was coming out nose first, with its front legs back, so I needed to push it back into the uterus and get its legs forward, which was easily done (once I got the ewe to hold still), then two gentle pulls and he was out – a huge twin, and still quite alive despite being stuck with his nose out for who knows how long before I found him during evening chores. Pulling lambs is happily quite a different experience than helping piglets; where you have tricky angles, narrow passages between hipbones, and two separate five foot long uterine horns to contend with. 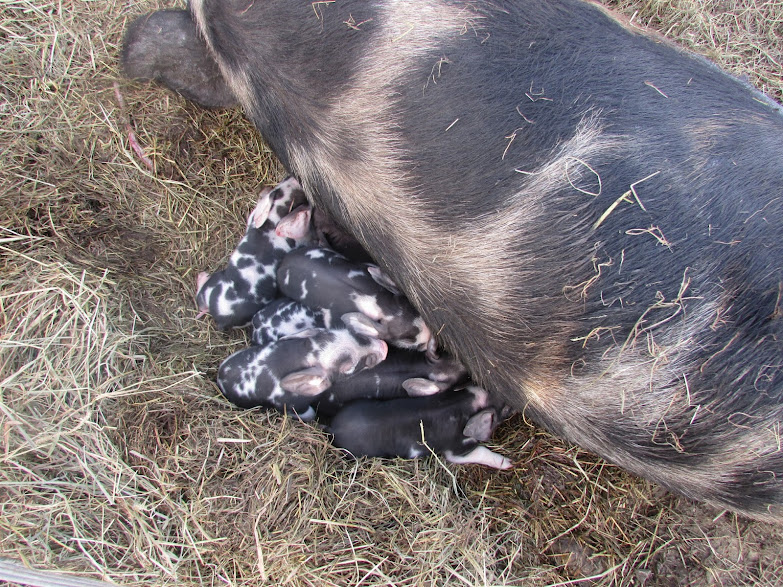 First of the Spring Piglets! Survival for the earliest litters, however, will be severely threatened by temperatures 20 degrees lower than the seasonal average. So far these guys are doing ok, but at only one day old it's hard to tell.

Seeing as it is now March, a month when high temperatures should be in the low 40s, with lows in the high 20s, we should be out of the woods with birthing – both for lambs and piglets, the first batch of which arrived like clockwork on March 1st. However, this winter is apparently not yet ready to abandon its hold on the Clawhammer hill and vale. Tomorrow is set to be -20 overnight…we are not out of the woods yet, much as we long to be.